The loss of Clarence is devastating. To Bruce, to the E Street Band, and to the fans. His importance in the band and in Bruce’s music cannot be overestimated. Perhaps even more than Bruce himself, he was the symbol of the E Street Band, and not even so much for his characteristic sax sound, but for the contrast his big, dark, calm presence was to the skinny, white whirlwind that was Bruce. He radiated a soothing spirituality and pure love that was impossible to ignore. He may have had physical problems during the last tours, but had it come to the point where he would no longer have been able to play his horn, there’s no doubt he would still have been an important part of the band. If only to sit on his throne and be a physical manifistation of the music and the message.

But it is of course as a saxophone player the world knew Clarence best, and his contribution to Bruce’s music shouldn’t be ignored. When he ripped into a solo, it really meant something. Like three fat lines with a marker under a word in a book. There are probably about a thousand saxophone players in the world who could have done a better job technically than Clarence, but when it comes to emotion, timing and just bringing the right sound at the right time - be it an ear-splitting screech or a gentle whisper, Clarence and Bruce’s music was a match made in Heaven. His saxophone was the icing on the cake, the magic stardust, the devine ingredient.

If Bruce was yin, Clarence was yang. Only time will show what Bruce will do without that. The only thing that’s certain is that it will be different. Very different. Will the band continue? A few weeks ago I would have said that without Clarence there would be no E Street Band. Now that it’s reality, my feeling is that the best way to keep his memory alive will be for the band to continue. And to just go on playing, and to go on playing, and to go on playing, until there’s no one left, and the big roadie in the sky has pulled the final plug. What better way to spit in the face of these badlands? 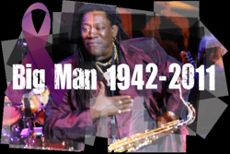